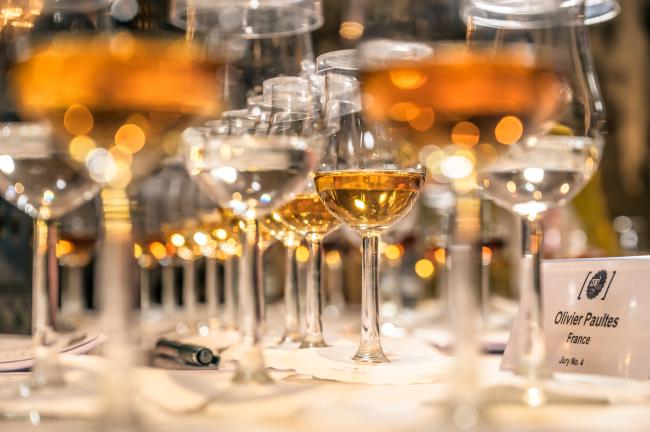 Golden prospects for the variety of spirits at the ISW / The winners from the categories Whisk(e)y, Rum, Vodka, Korn and Aquavit at the July Tasting 2022

With summer temperatures of almost 40 degrees Celsius, the jury of international spirits experts in the air-conditioned tasting halls of Meininger publishing house was honored to devote themselves to the supreme disciplines of whisk(e)y, rum, vodka, grain and some other spirits categories. More than 600 products were tasted and evaluated blindly over two days. The best 185 won one of the coveted medals – including 5x Grand Gold, 160x Gold and 18x Silver.

The third and final theme tasting of the year at Meininger’s International Spirits Award was dominated by the large categories Whisk(e)y and Rum, which accounted for the majority of the samples submitted. In both categories, an impressive variety could be observed, which was expressed in origin, style or cask finishes. What they all had in common, however, was a consistently high level of quality. But also in other spirits genres such as vodka, grain or aquavit, outstanding products crystallized, which can rightly be seen as a benchmark for their category.

Some of the award-winning products can also be tasted at Finest Spirits from 2 to 4 September 2022. The cult fair for fine spirits will take place again in Munich’s MVG Museum after a pandemic-related break. All information about the fair, the exhibitors and tickets can be found under www.finest-spirits.de

We present the special awards from July:

Scotch Whisky of the year 2022 (Single Malt):
1770 Glasgow Single Malt Whisky – Peated – Rich & Smoky
Founded in 2014, the Glasgow Distillery Company is the inspiration for the ongoing boom in the Scottish whisky industry. Since 1902 there had been no distillery in the city, now whisky is traditionally distilled from Scottish barley and soft local water. Even without an age indication, the smoky bottling prevails against the strong competition and wins the only Grand Gold in the Scotch category. New white oak and PX sherry barrels ensure the voluminous harmony of smoke and fruitiness.

Scotch Whisky of the year 2022 (Blended):
Scallywag Speyside Blended Malt
The Blended Malt Series of the independent bottler Douglas Laing are truly no longer an insider tip among whisky connoisseurs and already last year a blended malt of the series was able to win the special award. With the Scallywag, the fantastic aroma of Speyside shines this year, including whiskies from Mortlach, Glenrothes or Macallan. Spicy-sweet, fruity with subtle vanilla and honey notes, the bottling presents the character of the northeast in its purest form.

Irish Whiskey of the year 2022 (Single Malt)
Waterford The Cuvée – Irish Single Malt Whiskey
Ireland has also experienced a whisky fairy tale in recent years (yes, in this case without e) and hardly any distillery stands out more than Waterford; and not only because of the iconic blue bottles, but above all because of the uncompromising understanding of terroir. The barley from 25 different fields comes together in the “Cuvée” and provides at 50% vol. for a strong and long-lasting mélange of chocolate, citrus aromas and full malt.

Irish Whiskey of the year 2022 (Blended)
Writer’s Tears Japanese Mizunara Pot Still Irish Whiskey
A 9-month finish in barrels made of the rare Japanese water oak (Mizunara) gives the whiskey an intense sweet-fruity note, which is only gradually joined by the full-bodied-spicy malt note via coconut. The single barrel filling of the high-quality blend shows with 55% vol. and an exciting aromatic combination of experimentation and traditional character, the innovative radiance of the Irish Whiskey category.

American Whiskey of the year 2022:
Bib & Tucker 6 Year Old Bourbon Whiskey
70% corn provides the typical bourbon mild sweetness, 30% rye and malt bring complexity and at least six years in freshly charred oak barrels a pleasant maturity and mixability. A small batch bourbon for special occasions, which serves the full range of oak wood maturation and is almost reminiscent of a dessert – somewhere between pecan pie and chestnut cream – especially in the aftertaste.

Whiskey of the year 2022 (Germany):
finch German Selection by Schlumberger
According to estimates, there are no more whiskey distillers in any country than in Germany: in order to stand out from this mass, you have to do a lot qualitatively. The single malt whiskey of the Swabian finch distillery may mature for this limited edition for five years in red wine and three years in Madeira barrels. The intense dark color is also reflected in the aroma of dark berries with rich fruit sweetness and biscuit – the cask strength of 58.6% vol. is pleasantly integrated. A more than deserved Grand Gold Medal.

Whisky of the year 2022 (international):
Akashi Single Malt Whisky from Japan
Of course, whisky from Japan is no longer an insider tip and thanks to innovative distilleries they can emancipate themself more and more from the Scottish character. White Oak’s Akashi Single Malt – Japan’s first whisky distillery since 1919 – is produced annually in a limited batch and is stored in both ex-bourbon and extensive sherry barrels. A special feature is the imposing floral note of chamomile flowers, blossom honey and sweet hay.

Rum of the year 2022:
Equiano Rum – African-Caribbean Rum
When rum legends Richard Seale and Ian Burrell create a rum together, it definitely gives a lot of attention and in the case of the Equiano, the result also convinces with extraordinary finesse and complexity. The multicontinental blend combines molasses rums from Barbados and Mauritius, which have been characterized by different barrel types (ex-bourbon, limousin and ex-cognac) and climatic conditions. In addition to the idea, the harmony of taste of this joint venture, which will hopefully continue for a long time, is also exciting.

Rhum Agricole of the year 2022:
Rum J.M Fruity Garden
The series “L’Atelier des Rhums” of the Maison J.M has already inspired with several aromatic bottlings that present the diversity of the island of Mauritius. With the “Jardin Fruité” a true masterpiece of fresh sugar cane juice has now been achieved: voluminous ripe fruits, caramel dessert, citrus zest and harmonious wood sweetness make the mouth water. The 24 months in American and French oak give this rhum the perfect maturity.

Rum spirit of the year 2022 (flavored):
Havana Club Cuban Spiced
The flavored rum category had some surprises to offer this year and one of the big brands was able to show why they are at the top of the market. The Havana Club Cucan Spiced gets a warm-spicy character through tropical aromas of guava, pineapple, roasted coconut and various spices, which is accompanied by just the right amount of sweetness.

Vodka of the year 2022:
Studer Swiss Gold Vodka
Of course, the first thing that catches the eye of Swiss vodka from the Studer distillery is the look: the Matterhorn rises from the bottom of the bottle and is surrounded by gold leaf. In the blind tasting, however, the vodka was able to assert itself with its inner values. A soft, rich mouthfeel is accompanied by a gentle earthy aroma that gives the vodka a trace of terroir. There is gold in this – this is now also proven by the gold medal at the ISW.

Vodka of the year 2022 (flavored):
BrewDog Seven Day Passionfruit & Vanilla Vodka
The craft beer pioneers of BrewDog have been causing a stir for some time now with a growing range of spirits and especially in the often ridiculed field of flavored vodkas, the Scots show what is possible. In the 19m high Column Still, the gently pure vodka is produced over seven days and gently flavored with natural passion fruit and vanilla. The color shimmers only slightly golden, but our jury thinks: Grand Gold!

Grain (Korn) of the year 2022:
Heydt Manufaktur Edition III
Three different barrel types – ex-cognac, sherry and ex-bourbon – give the wheat grain of the Emsländer manufactory Heydt an inimitable harmony, which perfectly stages the mild distillate character as well as the influence of the wood trio. In Haselünne in northern Germany – in the shadow of Berentzen’s big competitors, so to speak – the private grain distillery Heydt produces fine brandies for lovers without frills year after year. Grand gold for great craftsmanship!

Aquavit of the year 2022:
Opland Noble Port Casks Norwegian Aquavit
With the bottlings of Opland, Norwegian aquavit can be experienced in its purest form: the basis is a brandy of Norwegian potatoes, caraway and sherry barrels determine the traditional aroma. In the Double Matured series, port barrels are added here, which round off the spicy aroma of the aquavit and give it a harmonious, fruity sweetness. Unfortunately, the category still runs under the radar, although the Opland is able to turn the worldview of some whisk(e)y lovers upside down.

All other award-winning products and results – including from the categories sake, tequila, ouzo or cachaça – can be found on the ISW website at:
www.meininger.de/en/spirits/tastings/international-spirits-award/results

In addition, the competition describes each spirit tasted sensorially in the aromas and attributes typical of the respective competition category. From this, a comprehensible aroma diagram is created for the distiller and consumer, which gives a first impression of the taste of the spirit.

Founded in 1903 in Neustadt an der Weinstrasse, Meininger Verlag is one of the oldest German specialist publishers. The company specializes in the wine and spirits industry in particular. Meininger Verlag has made a successful name for itself internationally with the Great International Wine Award MUNDUS VINI. In addition to well-known trade journals, the media company organizes trade fairs, industry events and specialist congresses. The portfolio of Meininger Verlag also includes FINEST SPIRITS in Munich, the trade fair for premium spirits with an international festival character.